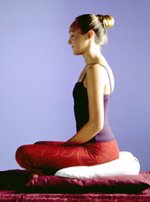 A posture (iriyàpatha) is a position of the body. The Buddhist scriptures frequently speak of four postures Ý walking (gacchanta), standing (ñhita), sitting (nisinna) and lying down (sayàna, M.I,57), although we could add to this crouching, bending, squatting, and several others. Because body and mind are interdependent, one's posture can be an indicator to the state of one's mind (D.I,76). The Buddha always held himself in a graceful and dignified way which reflected his effortless mindfulness and deep inner peace. An observer once said of the Buddha: `He walks neither too fast nor too slow ... He walks effortlessly ... When sitting he does not fidget with his feet ... or sit with his hand on his chin ... When he goes to a monastery, before he sits on the seat that has been prepared for him, he washes his feet, although he does not make a big fuss of it. Having washed his feet he sits down cross-legged, with his back straight, bringing mindfulness to the fore'(M.II,137-9). When the Buddha lay down to rest or to sleep he always did so in what was called the `lion posture' (sãhàsana), i.e. on his right side, with one foot on the other, mindful and fully aware (S.I,27,107).

The significance of posture in Buddhism pertains mainly to the practise of meditation. During the preliminary stages of meditation, the Buddha recommended that one sit (nisãdati), with the legs crossed (pallaïkaü) or folded (aóóhapallaïka), and the back straight (ujåü kàyaü, M.I,56). Most people find it helpful to put a pillow under their buttocks, place their hands either in their lap or on their knees and close their eyes. Some meditators might find it suits them better to sit on a chair rather than on the floor. The Visuddhimagga makes the helpful suggestion that meditators should try different postures for three days each, and then decide on the one that is most comfortable for them (Vism.128). The two most important aspects of good meditation posture are (1) that the back be straight without being rigid so as to facilitate clear breathing, and (2) that the body be relaxed and comfortable so that discomfort does not become a distraction (S.V,156).

Those whose goal is to develop mindfulness, should do so with a regimen of regular sitting practise. However, after their mindfulness has been strengthened, it is necessary to then try to broaden it by becoming mindful during all activities, i.e. while in any of the four postures. The Buddha said: `A monk has full awareness while coming and going, while reaching out his hands or drawing them back, while putting on his robes and carrying his bowl, while eating and drinking, chewing and tasting, even while defecating and urinating. He has full awareness while walking, standing and sitting, while falling to sleep and waking up, while talking and remaining silent'(M.I,57). See Lotus Posture.

what constitutes ‘sexual misconduct’ according to Buddhist ethics? Click Here