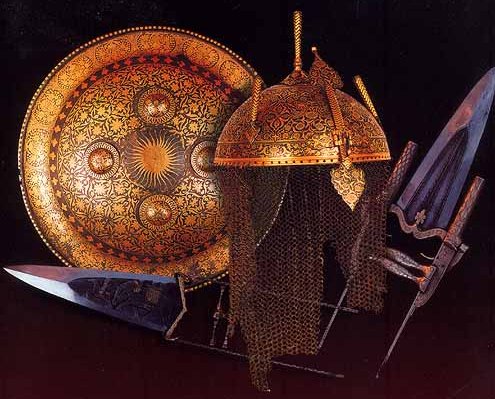 Weapons (àyudha or sattha) are instruments used for protection and for killing. The traditional five auspicious weapons were the sword (khagga), spear (setti), bow (dhana), shield (kheña) and the axe (vàsã). The standard sword was 33 fingers long (Ja.I,273) and arrow heads could be of a variety of shapes (M.I,429) and were sometimes smeared with poison.

To practise the first Precept, the Buddha said, required one to `refrain from taking life, to lay aside the stick and the sword, and live with care, kindness and compassion for all living creatures'(D.I,4). Sometimes he used the word `weapon' to mean violence. Probably using an idiom of the time, he said of people engaged in violent argument that they were `wounding each other with the weapon of the tongue' (M.I,320). On another occasion he said that a person with a heart full of love, cannot be harmed by weapons (A.V,342). Trade in arms (satthavanijjà) is one of the five wrong means of livelihood mentioned by the Buddha (A.III,208).

People often expressed their admiration at how well-trained the Buddha's disciples were and that this training never involved pressure, coercion or threats. Once King Pasenadi said to the Buddha: `I am a noble anointed king, with the power to execute, fine or exile whoever deserves it. And yet when I am in council, people will often interrupt me. Even if I tell them to wait until I have finished speaking, still they interrupt me. But I notice that when you are teaching to several hundred people there is not even the sound of someone coughing or clearing their throat. Once, when you were teaching the Dhamma to a crowd of people, someone did clear his throat. One of his companions in the holy life nudged him with his knee as said ßQuiet, sir, make no noise. The Lord is teaching us Dhamma.û Then I thought ßIt is wonderful, truly marvelous, how an assembly could be so well-disciplined without stick or sword.û In fact, I know of no other assembly so well disciplined'(M.II,122).

Ancient Indian gods were said to have often engaged in war and armed combat, and in iconography they are often depicted holding weapons. A clever poem called the Vi÷eùastava, composed in about the 4th century CE, compares the Buddha's appearance, behaviour and accoutrements with those of various Indian deities, demigods and heroes. The poem can only be fully appreciated by a reader well-versed in the sometimes complex legends and hagiographies of Hinduism, but the verses mentioning weapons are understandable enough. Here are verses 8, 53, 55 and 56 from the Vi÷eùastava. `With discus and spears they could not conquer the forces of Màra. But without weapons you achieved victory through love.' `Vyàsa proclaimed that death in battle would win glory in heaven. Whereas you, Oh Lord, have taught that a mind of violence will result in suffering in purgatory.' `Skandha, Indra, Upendra and Rudra all hold weapons, out of fear or to frighten others. You fear nothing and you frighten no one. Neither fearful nor frightening, you take up arms against nobody.' `You are free from fear, you don't frighten others, and thus you are the highest among beings.'

that the Mahavihara Monastery in Sri Lanka used to house 1500 monks? Click Here