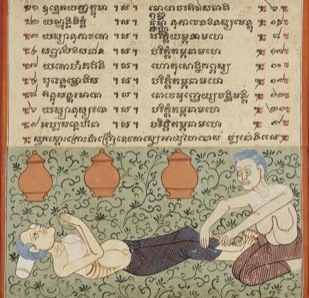 Massage (parimaddana or ucchadana) and limb rubbing (sambahana) were already well-known during the Buddha's time. Attentive children would massage their aged parents limbs (A.I,62) and sensual massage that stopped just short of being sexual was also known (A.IV,54). We read of nuns having their forearms, backs, hands, calves, feet, thighs and faces massaged with a cow's leg bone. Probably the roundels at the ends of the bones were rubbed up and down the body. One could even have one's gums massaged (Vin.II,266).

The Buddha forbade monks from having massages for pleasure (D.I,7) although he seems to have approved of therapeutic massage. On one occasion he is recorded as having been `oiled' (sinehetha) over several days when he was suffering from a particular illness (Vin.I,279). The meaning of this term is not clear. It may refer to the Ayurvedic practice of administering medicine in oil applied to the skin or to an oil massage. There is also a reference to ânanda massaging the Buddha's limbs when he was old (S.V,217).