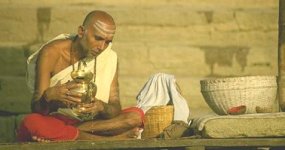 Brahmin are the hereditary priests of Hinduism and occupy the highest position in the caste system. The Manusmṛti, the classical text on Hundu law, says: `By his birth alone a brahman is a god even to the gods, and his teachings are authoritative for humans because it comes from the Vedas. ' At the time of the Buddha brahmins had a reputation for greed, arrogance and worldliness, which was in contrast to the high values they espoused. The Buddha criticised the brahmins' demand for honour and precedence simply because they were born brahmins and said that anyone high caste or not was worthy of respect if they were virtuous. This, the Buddha said, made one a real brahmin: `Whoever is friendly amidst the hostile, peaceful amidst the violent, content amidst the clinging, him I call a true brahmin. He, whose passion and hatred, pride and hypocrisy have just fallen away like a mustard seed on a needle point, him I call a true brahmin. Whoever speaks words that are gentle, informative, pleasant and offensive to none, him I call a true brahmin.' (Dhp.406-8). Because he threatened their high position, many brahmins were bitter opponents of the Buddha. On the other hand, because they were also often well-educated and intelligent, a good number of brahmins converted to Buddhism both during the Buddha's time and in the following centuries.