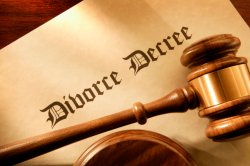 Divorce is the ending of a marriage. In some religions, marriage is a religious act and thus there are various restrictions on divorce. The Bible stipulates that a man can only divorce his wife if she commits adultery (Matthew 5,31-2; 1 Corinthians 6,10-11). There was no formal divorce procedures in ancient India. According to the Manusmçti, a husband could expel his wife if she was barren, unfaithful and cantankerous, had a long-term illness or did not produce a son within a certain period. There does not seem to be a word in the Tipiñaka for divorce, other than perhaps vikiraõa meaning `to break' or `to separate', which is sometimes used in reference to marriage (e.g. D.I,11). According to the Vinaya, `being told ßEnough!û '(alaüvacanãyà) by one's husband effectively ended a  marriage (Vin.III,144).

When someone was dissatisfied with their spouse, one or the other would either depart or be expelled from the household. It was usually the wife who did this or to whom this was done. When Ugga decided that he was going to become celibate he informed his four wives that they could continue to live in the house, return to their parents or take another husband. The eldest wife apparently already has her eye on another man and asked to be given to him, which Ugga happily did. (A.IV,210). When Sangàmaji decided to become a monk he simply abandoned his house and his pregnant wife. After his wife gave birth she took the baby to Sangàmaji but he refused to acknowledge either her or the child (Ud.5-6). Isidàsã and her husband lived in his parent's house. He was unhappy with her so he left the house and resided somewhere else. Isidàsã returned to her parent's house and they subsequently married her off to another man (Thi.413-20). The Buddha said nothing about divorce. See Wedding.

why the robes of Buddhist monk and nuns are yellow or brown-colored? Click Here