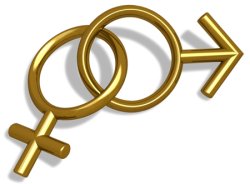 Gender (liïga) is the fact of being either male or female (S.V,204). The Buddha described gender as being distinguished by either male (purisindriya) or female (itthindriya) thoughts, occupation, attire, interests, impulses, voice, appearance, scent, etc. (A.I,1; IV,57). It is clear from this that he saw gender as a combination of physical and psychological, inborn and acquired, factors. This means that while both genders are conditioned to a high degree by their bodies, they do have the ability to transcend the psychological and social aspects of gender. Thus, as far as the potential to attain enlightenment is concerned, men and women are equal. The Buddha said that women are as capable of becoming enlightened as men (Vin.V,254): `Whether it be a woman or whether it be a man, whoever travels in the Chariot of Dhamma will draw close to nirvana'(S.I,33).

Despite this, women in traditional Buddhist cultures, as in most other cultures, have long been treated as inferior to men. This discrimination has also extended to the religious life generally and the monastic vocation in particular. In doing this, traditional Buddhist cultures have ignored the Buddha's high ideal that the spiritual quest should be open to all despite status, race or gender. On the other hand, Buddhist cultures have never subjected women to purdah, genital mutilation, enforced widowhood, widow burning and other cruelties.

Occasionally the Buddhist scriptures mention hermaphrodites, people who are born with both male and female genitalia (A.III,128). Hermaphroditism does not constitute a separate gender because it is a rare endocrine deformity, not a naturally occurring state. Hermaphroditism should not be confused with homosexuality, which is dispositional rather than biological.

`Origins of Gender Differentiation and Sexuality as Represented in the Buddhist and Christian Genesis Myths,' P. D. Premasiri, in Buddhist Studies,2001.

that ancient Buddhist physicians believed that ‘There is nothing in the world that cannot be a medicine?’ Click Here