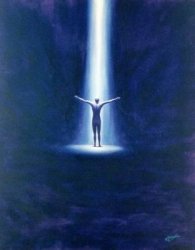 While the English word enlightenment refers to the process of understanding, the Pàëi word usually translated as enlightenment, bodhi, both means `to awaken', or `to understand', i.e. to open the eyes. When, as a result of practising the Buddha's Dhamma, one deeply, fully and directly realizes the inadequate (dukkha), impermanent (anicca) and selfless (anatta) nature of conditioned phenomenon one is said to have become or to have attained enlightenment. Quite automatically, this realization brings about a radical change in one's experience and behaviour. Frustration, anxiety and fear are replaced by peace and joy. A person who is enlightened is called either a Buddha or an arahat. The state itself is also often called nirvana.

According to the Buddha, enlightenment comes in four stages, each triggered by the presence of particular spiritual qualities and the realization of certain truths. The first of these stages, Stream Winning (sotapàpatti), starts a process which inevitably leads to complete enlightenment, either within a matter of minutes or perhaps a few lifetimes. Stream Winning is characterized by unshakable sense of certainty about the Three Refuges (aveccapasàda), effortless morality (sãla), a realization that the body is not the self (sakkàyadiññhi) and no longer clinging to rules or morality (sãlavataparamàsa, D.III,227). The other stages are called Once Returning (sakadàgàmità), Non Returning (anàgàmità) and the final stage, complete enlightenment (arahatta). See Mysticism.

why the Buddha is often depicted with long ear lobes? Click Here