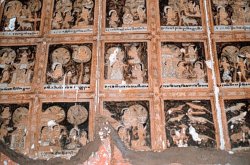 Jàtaka means `about birth' and is the name of a book in the Khuddaka Nikàya, the fifth part of the Sutta Piñaka which is the first division of the Tipiñaka, the sacred scriptures of Buddhism. The Jàtaka consists of 547 stories Ý some quite brief, others very long Ý illustrating Buddhist virtues such as kindness, prudence, honesty, self-sacrifice, courage and determination. The characters in many of the stories are animals. The early Buddhists culled many of these stories from the great store of Indian folklore and fables and made them Buddhist by saying that the hero of each story was actually the Buddha in one of his former lives as a bodhisattva. Other Jàtaka stories are purely Buddhist creations. Dating the Jàtakas is very difficult.  Many of the stories are certainly pre-Buddhist, but in their present form were probably composed between the 3rd and 1st centuries BCE.

Each Jàtaka consists of four parts. Preceding all the stories is a long introduction (nidànakathà), which tells the traditional life of the Buddha from his aspiration to become a Buddha up to the founding of the first monastery. Each story is prefaced by a `story of the present' (paccuppanna vaõõa), giving the reasons why the Buddha supposedly told the story, and ends with a `connection' (samodhàna) in which the characters in the story are identified. The stories themselves (atãta vatthu) are in prose and imbedded within them are verses (gàthà), of which there are about 2500 altogether. Only these verses are considered the actual words of the Buddha.

With their lively plots, well-defined characters and flashes of humor, the Jàtaka has long been one of the most popular books in the scriptures. Scholars believe that some of the fables of Aesop and many other collections of folklore have their origins in the Jàtaka.

when the first film on the life of the Buddha was made? Click Here