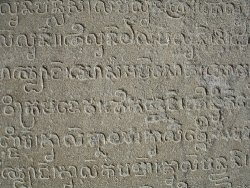 Language (bhàsà) is a system of communication by sounds and symbols used by people of a particular country or region. It is not known what the Buddha's native language was although it must have been the vernacular of the part of India he was born in, perhaps a distant relative of modern Hindi. The evidence suggests that he was proficient in several languages, which is only to be expected seeing that he travelled and taught over a wide area (M.III,235). The Buddha did not believe in the notion of an `original', `pure' or `sacred' language as is clear from his exhortation that we could and should learn the Dhamma `each in your own language'(Vin.II,139). He also stated that when teaching the Dhamma he would always adopt the language of his audience in order to be able to better communicate with them (D.II,109). See Pàëi.

`The Dialects in which the Buddha Preached,' K. R. Norman, Collected Papers, Vol.II, 2003