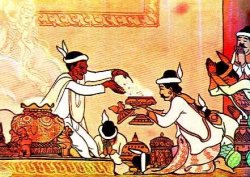 Doõa was a learned and respected brahmin who lived at the time of the Buddha. This was probably not his real name but one by which he later came to be known. The Pàëi word doõa means a measuring cup or vessel. Doõa happened to be in Kusinàrà just at the time the Buddha passed away. As word of this momentous event spread, representatives from several kingdoms and clans began arriving in Kusinàrà to claim the Buddha's mortal remains. The Sakyans wanted them because, as their representative said: `The Tathàgatha was the greatest of our tribe.' The envoy of the king of Magadha said that his master was entitled to the ashes because he was of the warrior caste as was the Buddha. The Mallas of Kusinàrà, arguing from the standpoint of possession being nine-tenths of the law, said: `The Tathàgatha attained final nirvana in the precincts of our town and we will not give up his bones.' In all, eight claimants were involved in this unseemly dispute. In the Tipiñaka, Doõa is portrayed as a skilled arbitrator. He addressed the crowd saying: `The Buddha's teaching is about patience and it is not right that strife should come from sharing out the remains of this best of men. Let us all be combined in harmony and peace. In the spirit of friendship, let the remains be divided into eight.'

These words brought everyone to their senses and it was agreed that Doõa should divide the relics according to what he thought fair. As a reward for his services he was given the vessel in which the relics had been held and from which he had measured them out. He received it with gratitude and announced that he would enshrine it in a ståpa. The division having been made to everyone's satisfaction, an envoy from the Moriya tribe turned up and demanded a portion of the relics and Doõa came to the rescue again, suggesting that the latecomers be given the ashes from the funeral pyre (D.II,164-6). This was done and thus the first ten Buddhist ståpas came to be built.

The Buddhacarita uses this incident to put into Doõa's mouth a long and moving eulogy to peace, compromise and common sense. Tradition says that Doõa composed a poem of 16,000 syllables in praise of the Buddha. This poem, called the Doõagajjita, is now lost. See Funerals and Measuring.

that ancient Buddhist physicians believed that ‘There is nothing in the world that cannot be a medicine?’ Click Here