LIFE, THE STAGES OF 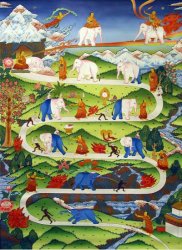 For centuries philosophers and moralists have tried to identify the stages a human being will or should pass through on their journey from birth to death. In Western thought the most famous of these is probably Shakespeare's Seven Stages of Man. In conventional thinking in ancient India, life was said to have three stages; youth (pañhamavaya), middle age (majjhimavaya) and old age (pacchimavaya, Ja.I,79). Hinduism gradually evolved the idea that the proper course of a person's life (à÷rama) is to be a student, a householder, a retiree and finally a religious ascetic.

The Buddha gave his own version of the stages of life, although as with so much else, he took an entirely different perspective from most other thinkers on the subject. He spoke of four stages in a person's life. The first is that of the `tender baby, vulnerable, lying on its back and playing with his own faeces'. He identified this as the individual's initial pleasurable experience, albeit a crude one which would eventually be grown out of. In the next stage `that child grows older and with the awakening of his sense faculties plays with toy ploughs, tip-cat, jumping, leaf windmills, marbles, toy chariots and toy bows'. Such pleasurable games are, the Buddha said, at a higher level but will nonetheless eventually be outgrown also. At the third stage `having grown older, with the complete development of the sense faculties and experiencing the five sense pleasures, he comes under the sway of, gripped by, fascinated with and addicted to, objects seen with the eye, sounds heard with the ear, odours smelled with the nose, tastes tasted with the tongue and sensations felt with the body'. In the last stage the individual gives up sensual pursuits, embarks on the spiritual quest and attain peace and joy through meditation (A.V,204-9). This, the Buddha said, is `the lifestyle more exalted and more refined than the former ones'(abhikkantataro capaõãñataroco, A.V,209).

The Buddha's vision of the stages of life differs considerably from those of other thinkers. Most emphasise the physical factor (i.e. the maturing and decaying of the body), whereas the Buddha focuses entirely on the psychological. Most others see the various stages as natural, inevitable, inescapable even. In the Buddha's schema only the first three stages could be said to be natural. We can, he taught, create a more fulfilling destiny for ourselves by choosing to break away from the pull of sensory stimulation and develop the mind to its highest potential. Most other versions of the stages of life end in death while the Buddha's ends in the attaining of a state of clarity, peace and joy in which death is seen as inconsequential.

that meditation may have some influence on the complexion? Click Here