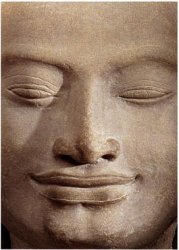 Negatively peace (samagga, santi or upasama) is the absence of conflict while positively it is the presence of harmony, tranquillity and ease. The Buddha praised and promoted peace within society, between individuals and within individuals. The Jàtaka says: `This is my message to you who are assembled here; live in concord, avoid arguments ... train yourself in peace, for this is praised by the Buddhas. Delight in peace and justice and thereby freedom from bondage will not be destroyed'(Ja.IV,211). The Buddha commented that even the gods envy the person who lives in peace (Ud.30). He described himself as `a reconciler of those at variance and an encourager of those already united, rejoicing in peace, loving peace, delighting in peace, speaking in favour of peace'(D.I,4).

But the Buddha was not just at peace himself, nor did he merely speak up for peace, he also actively did what he could to promote it. On one occasion, the Sakyans and their neighbours the Koliyans, were about to go to war over the water in the river that divided their countries from each other. It was the height of summer and there was barely enough water to irrigate the crops. The Buddha positioned himself between the warriors of both sides and inquired: `What are you fighting about?' `Water,' they replied. `And what is more precious? Water or the blood of your young men?' he asked. `Blood is far more precious than water', they replied. `Then is it not improper to spill blood for the sake of water?' These reasoned and gentle words of admonishment brought everyone to their senses, a compromise was worked out and peace was restored (Dhp-a.254).

It is appropriate that the Dalai Làma, the first Buddhist monk to be awarded the Nobel Prize, and Aung San Suu Kyi, the first Asian woman to be awarded it, were both given it for their efforts to bring about peaceful political change. The Buddhist scriptures say: `Having seen contention as a danger and harmony as peace, abide in unity and kindness; this is the teaching of the Buddhas' (Cp.3,15,13).

One of the meditations taught by the Buddha was the Recollection on Peace (A.I,29) during which one contemplates on the beauty of peace within oneself and one's community. The deepest and most lasting peace, however, is only available to those who have attained nirvana. The Buddha said: `Peaceful is the mind, speech and actions of one who is utterly quiescent and freed by knowledge'(Dhp.96).