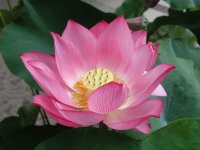 The lotus (aravinda, bhisapuppha, kamala, paduma, pokkhara, puõóarãka or muëàpuppha) is a beautiful flower with the botanical name of Nelumbium speciosum and which is native to many parts of Asia. The Milindapa¤ha describes the lotus as `shiny, soft, desirable, fragrant, liked, sought after, praised, unsoiled by water or mud, adorned with petals, filaments and pericarps, frequented by bees and growing in cool limpid water' (Mil.361). Lotuses grow best in still muddy ponds and when mature put forth exquisite blossoms Ý white, yellow, pink or light red Ý which rise above the surface. This characteristic is often mentioned in the Buddhist scriptures as being analogous to the enlightened person who lives in the world of ignorance and craving and yet rises above it to become pure and beautiful (Th.700). The Buddha also often compared the way drops of water slip off the lotus leaf to the way the enlightened person remains unaffected by the temptations and vicissitudes of the world (Dhp.401). For these reasons and simply because of its sheer beauty, Buddhists have always had a particular regard for the lotus. The lotus is often confused with the water lily, which is called indãvara, sogandhika or uppala in Pàëi.

The Lotus in the Buddhist Art of India, Teoh Eng Soon, 2003.

that the Buddha was sometimes compared to a doctor? Click Here