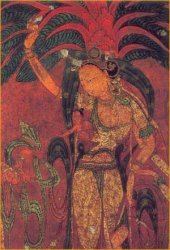 Mahà Màyà was the name of Siddhattha Gotama's mother. She was born as the daughter of A¤jana of Devadaha and later became the first wife of Suddhodana, the elected ruler of the Sakyan tribe. There is very little information in the scriptures about Mahà Màyà perhaps because she died seven days after Siddhattha's birth. Her name is only mentioned once in the Tipiñaka (D.II52). Tradition says that on the night she conceived she dreamt of a white elephant. It also says that she was over 50 years old at the time.

when the first film on the life of the Buddha was made? Click Here