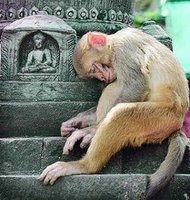 The monkey mind (kapicitta) is a term sometimes used by the Buddha to describe the agitated, easily distracted and incessantly moving behaviour of ordinary human consciousness (Ja.III,148; V,445). Once he observed: `Just as a monkey swinging through the trees grabs one branch and lets it go only to seize another, so too, that which is called thought, mind or consciousness arises and disappears continually both day and night'(S.II,95). Anyone who has spent even a little time observing his own mind and then watched a troop of monkeys will have to admit that this comparison is an accurate and not very flattering one. On another occasion the Buddha said that a person with uncontrolled craving `jumps from here to there like a monkey searching for fruit in the forest'(Dhp.334).

In contrast to this, the Buddha asked his disciples to train themselves so as to develop `a mind like a forest deer' (miga bhåtena cetasà, M.I,450). Deer are particularly gentle creatures and always remain alert and aware no matter what they are doing.

what the Buddha thought about the spiritual value of sex? Click Here