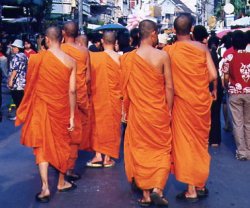 Buddhist monks and nuns wear robes (cãvara or kàsàva) rather than conventional lay clothes. The attire consists of three parts; a smaller rectangular robe wrapped around the waist (antaravàsaka), a belt (bandhana) used to secure it, and a larger rectangular robe (uttaràsaïga) draped around the whole body, over the left shoulder and under the right arm. Sometimes the Buddha would drape part of his robe over his head, perhaps to shield his eyes when meditating (S.I,167). A double-layered robe (saïghàñi) is used in cold weather. Robes could be made out of linen, cotton, silk, wool, sana fibre or hemp (Vin.I,394). Some monks made their robes out of rags and scraps of cloth sewn together. Concerning such robes, the Buddha said that when a monk begins to experience the joys of meditation, his rags will seem to him like beautifully-coloured apparel (A.IV,230).

The popular term `saffron robe' is a misnomer Ý saffron (kuïkuma) has never been used to colour robes because it is not a dye and even if it were it is far too expensive. The correct colour is yellow, orange or tawny brown, the same as the kaõikàra flower, Pterospermum acerifolium (Ja.II,25). To the ancient Indians this colour suggested detachment or letting go, because leaves go yellowish-brown before dropping off the trees. A set of robes is three of the eight basic requisites of monks and nuns. To many Buddhists, as to the Buddha himself, the yellow robes were more than mere clothing, they were also a symbol of the highest ethical and spiritual ideals. The Buddha said: `Whoever is free from impurities, filled with virtues, self-controlled and truthful, he is indeed worthy of the yellow robe' (Dhp.10).

The Buddha once said: `If one were to seize the hem of my robe and walk step by step behind me, he would nonetheless be far from me if he was greedy, filled with anger and desire, careless, corrupt, unrestrained, noisy and distracted. Even if one were to live a hundred yojanas away from me but be free from desire and longing, have a kind heart and a pure mind and be mindful, composed, and serene and focused, he would nonetheless be near to me and I would be near to him. And why? Because he would see the Dhamma and seeing the Dhamma he would see me'(It.91). See Nudity.