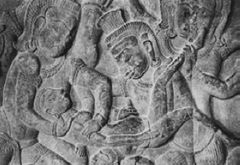 Abortion (gabbhapàtana) is a form of birth control where the foetus is killed to prevent it from developing fully and being born. Abortion was known in ancient India and was done either by an operation, by exerting pressure on the abdomen, by heating it or by administering various drugs (Vin.III,84). According to Buddhism, life begins `with the mind's first arising, when consciousness first manifests itself', although exactly when this happens is not stated (Vin.III,73).  Presumably it is at or soon after conception and thus abortion is considered to be killing. The Jàtaka says that abortionists have an unfavourable rebirth (Ja.V,269). Monks and nuns are forbidden to procure abortions for others (D.I,11).

In some cases abortion may be necessary to save the life of a mother, but today most abortions are performed to avoid embarrassment or the inconvenience of a baby arriving unplanned. To the Buddhist, these seem to be very poor reasons for destroying a life. Abortion is illegal in Sri Lanka and Burma, but not in Thailand. See Rebirth.