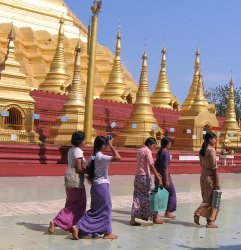 Pilgrimage (cetiyacàrikà or vandanàcàrikà) is the act of travelling to a place of religious significance for specifically religious reasons. In Buddhism, pilgrimage is neither an obligation as in Islam nor a penance as in Christianity, although it has long been and remains even today a popular practice. The Buddha recommended that his disciples visit at least once in their lives the places where the four most important events in his life took place Ý Lumbinã where he was born, Uruvelà where he was enlightened, Sàrnàth where he first proclaimed the Dhamma and Kusinàrà where he passed away (D.II,141). However, while going on pilgrimage is good, being virtuous is far more important. The Jàtakamàlà says: `More beautiful than any garland, sweeter than any taste, truthfulness generates great good and is less arduous than practising austerity or pilgrimage to far-off shrines.' The first Buddhist we know of to have gone on pilgrimage was King Asoka who went to Uruvelà in about 260 BCE and to Lumbinã some ten years later.

The most famous travel book of all time and one that has been continually in print for 14 centuries was written by the Chinese pilgrim Xuanzang. This Buddhist monk spent 16 years on pilgrimage in India and later wrote an account of his journey which is filled with such detailed and accurate information that it continues to be studied by historians, geographers and travellers in India even today. See Saïkassa.