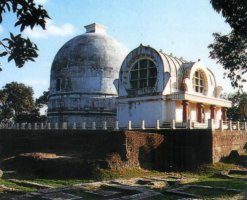 Kusinàrà was the main town of a clan of people called the Mallas and the scene of the Buddha's death and funeral. That it was a small place is clear from ânanda's description of it as `a mud and wood town in the jungle'. (D.II,145). The Buddha's final journey took him from Vesàli to Kusinàrà, a distance of about 190 kilometres. He left Vesàli after the rainy season (mid-October) and arrived in Kusinàrà three months later (D.II,114) which means that he would have walked an average of 2 kilometres each day. As he stopped in several places along the way, although for how long we do not know, he probably actually walked more than that each day. Either way, such a trip would have been tiring given the Buddha's age, the state of his health and the weather.

When the Buddha arrived on the outskirts of Kusinàrà he lay down between two sal trees and gave his final instructions to his disciples. We are told that he passed away during the third watch of the night (rattiyà pacchime yàme, D.II,147). In ancient India the night was divided into three watches (pañhama, majjhima and pacchima) Ý starting at sunset, finishing at sunrise and each being of equal length. This would mean that the Buddha passed away sometime between about 3 A.M. and sunrise.

For centuries Kusinàrà was a centre of pilgrimage and there were two ståpas there, one marking the place where the Buddha passed away and another marking where the cremation of his body had taken place. There were several temples and monasteries there as well. After Buddhism died out in India, Kusinàrà was overgrown with jungle and was only rediscovered in 1861. Excavations in the 20th century revealed numerous ruins including the two ståpas. See Doõa, Meal, Travels and Vesàkha.