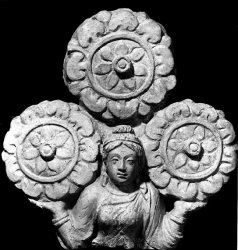 A refuge (saraõa) is a place one goes to in order to find peace, security and safety. The Buddhist considers continual rebirth in saüsàra to be an unenviable prospect and believes the Buddha, the Dhamma and the Saïgha to be a refuge from this. Thus the Buddha, Dhamma and Saïgha are often called the Three Refuges. The Buddha is a refuge in that his enlightenment demonstrates that saüsàra can be transcended, the Dhamma is a refuge in that it shows how enlightenment can be attained and the Saïgha is a refuge in that it offers the guidance, encouragement, example and support needed to transcend saüsàra. When a person decides to become a Buddhist, they recite a simple formula in which they affirm their confidence in and commitment to the Three Refuges. This formula is

that Buddhists traditionally make a distinction between reincarnation and rebirth? Click Here