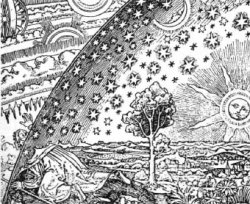 The universe (lokadhàtu) is the whole of space and everything in it. Of all the ancient conceptions of the universe, the Buddha's is the most realistic. According to him the universe has no ultimate beginning or end (S.II,178), but rather  evolves, dissolves and re-evolves over a vast period of time (D.III,84). Within the universe there are countless world systems (lokadhàtu) which correspond to galaxies. The Buddha said that within these world systems are `thousands of suns, thousands of moons, thousands of continents' (A.I,227). He also spoke of the `the black, gloomy regions of darkness between the world systems, where the light of our moon and sun, powerful and majestic though they are, cannot reach'(M.III,124), suggesting that these galaxies are great distances away from each other in space.

Some religions believe that the existence of the universe can only be explained by positing a supreme being who created it, but Buddhism considers this to be mistaken. According to the Buddha, the universe and everything in it came into being due to natural, not supernatural, causes. The Visuddhimagga says: `There is no Lord or Brahma  who created saüsàra. Phenomena just roll on, a mass of causes and conditions' (Vism.603).

which Buddhist monarch said that he considered his subjects to be like his own children? Click Here