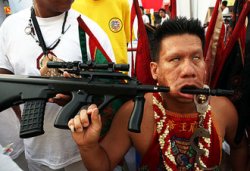 Different cultures or groups within specific cultures sometimes disfigure the human body in ways that are permanent. Some examples of this are foot binding, male and female circumcision, tattooing, scarification, head binding, neck stretching and teeth filing. Buddhism has no specific teaching on this matter but other than tattooing, none of these things have ever been practised in Buddhist countries. This is probably due to Buddhism’s generally respectful attitude towards the body and its disparagement of superstitions of the type that require disfiguring the flesh.

Some religious and secular legal systems advocate physical disfigurement for certain crimes, e.g., branding, amputation, castration. Buddhism is against such drastic punishments for three reasons. (1) They involve extreme cruelty which is an evil in itself and they also have a hardening effect on the people who carry out such punishments and on society in general. (2) The consequences of many crimes only last for a limited period whereas physical disfigurement lasts a lifetime and is thus disproportionate to most of the crimes it punishes. (3) All legal systems are human institutions and thus fallible. If a person is mutilated for a crime and it is later discovered that he was actually innocent, it is impossible to justly compensate him. See Capital Punishment.

whether smoking would be infringing Buddhist ethical standards? Click Here