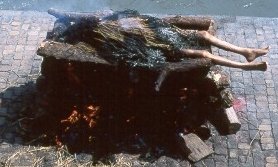 Cremation (àëàhanakicca) is the burning of the body after death, rather than burying, mummifying, exposure to the elements or committing to water. The Buddha asked that his body be cremated (D.II,142) and because of this, cremation has been the most common way of disposing of the dead in most Buddhist countries ever since.

Cremation was illegal in most Western countries until the late 19th century, the belief being that it would make bodily resurrection on Judgment Day impossible. It has only recently been allowed by the Catholic Church and is still forbidden in the Orthodox churches and in Orthodox Judaism. See Funerals.