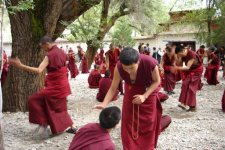 A debate (kathojja or vivàda) is a formal discussion between two or more people holding opposing views conducted in a public forum. Indian society has always been very tolerant in religious matters. The pros and cons of different teachings were aired at public debates and discussions and individuals were left to make up their own minds as to whether or not to believe. The Tipiñaka and other sources give us a good idea of how these debates were conducted.

If on being asked a legitimate question for a third time one could not answer, one was considered to have been defeated (M.I,231). Participants were expected to use recognized arguments and adhere to accepted procedures and an adjudicator (pa¤havãmaüsakà) made sure they did (Sn.827). To avoid answering a question by asking another question, to change the subject or to ridicule the questioner, was considered improper. Likewise, to shout down an opponent, catch him up when he hesitated or interrupt from the sidelines was also not allowed (A.I,197; M.II,168).

A teacher who held his own in debate would win honour and respect while the defeated had to slink away in shame. There is a description of a participant in a debate `reduced to silence, his head lowered, his eyes downcast, at a loss, unable to make a reply' while the audience `assailed him on all sides with a torrent of abuse and poked fun at him' (A.I,187). To have `one's wings clipped' (opakkhiü karoti, A.I,189) in a debate could mean a teacher losing his prestige, his disciples and his patrons. Vague theologies and dreamy doctrines were soon subjected to cold reason, logical scrutiny and demands for evidence. Those that stood the test, like the Buddha's Dhamma, flourished, those that did not faded away.

With the stakes so high it is not surprising that these debates could get heated and sometimes even end in blows. It was probably for this reason that during the early part of his career the Buddha avoided such assemblies. He said: `Some debates are conducted in a spirit of hostility and some in a spirit of truth. Either way, the sage does not get involved'(Sn.780). As a consequence of this, the Buddha was accused of being unable to defend his ideas in the face of careful scrutiny. One critic said of him: `Who does the monk Gotama speak to? From whom does he get his lucidity of wisdom? His wisdom is destroyed by living in solitude, he is unused to discussions, he is no good at speaking, he is completely out of touch. Just as an antelope circles around and keeps to the edges, so does the monk Gotama'(D.III,38). It seems that for a long time the Buddha was content to let his Dhamma speak for itself. But as people began to seek deeper explanations of it and it began to be criticized and even misrepresented, he was compelled to participate in public debates and discussions.

Very soon the Buddha earned a reputation for being able to explain his philosophy with great lucidity and to effectively defend it against criticism. He also began to subject the doctrines of others to hard questioning. So successful was he in confounding critics and converting the followers of other religions that he was even accused of using occult means to do this. Someone said of him: `The monk Gotama is a magician who uses magic to convert the disciples of others'(M.I,381). Of course, there was no truth in this claim. The only `magic' the Buddha used was the appeal to common sense, reason and experience.

The Buddha's aim was never to defeat an opponent, silence a critic or `win' disciples, but to lead people from ignorance to clarity and understanding. In one of the most heartfelt appeals he ever made he said: `I tell you this. Let an intelligent person who is sincere, honest and straightforward come to me and I will teach him Dhamma. If he practises as he is taught, within seven days and by his own knowledge and vision he will attain that holy life and goal. Now you may think that I say this just to get disciples or to make you abandon your rules. But this is not so. Keep your teacher and continue to follow your rules. You may think that I say this so you will give up your way of life, follow things you consider bad or reject things you consider good. But this is not so. Live as you see fit and continue to reject things you consider bad and follow things you consider good. But there are states that are unskilful, defiled, leading to rebirth, fearful, causing distress and associated with birth, decay and death, and it is only for the overcoming of these things that I teach the Dhamma'(condensed, D.III,55-6).

Throughout history debates have had an important part to play in protecting and promoting Buddhism. The Samye Debate of 742 in Tibet between Kamala÷ãla and Mahàyàna meant that the Indian rather than the Chinese interpretation of Dhamma became dominant in that country. The most significant debate of recent times took place in Panadura in Sri Lanka in 1873 between Venerable M. Guõànanda and the Wesleyan missionary Reverend David de Silva. The former's decisive victory gave Buddhists a renewed confidence in themselves and their religion and marked the beginning of a revival of Buddhism in Sri Lanka.