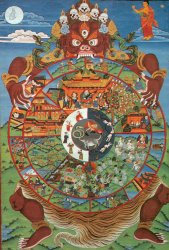 Dependent origination or conditioned arising (pañiccasamuppàda) is the Buddhist concept that (1) nothing is `a thing in itself' but is dependent for its existence on other things, and that (2) things come into being due to natural causation, not randomly or by the will of a supreme being. To give an example of the first of these concepts Ý we speak of `a flower' but if, one by one, we remove the stem, the petals, the nectar, the stamens, the pistils, etc, none of which are the flower itself, we find that the `flower' has gone. A flower is a convenient term for the sum total of its parts and each part is again the sum total of its parts too. This is true of cities, books, computers, rocks and people. Thus according to the Buddha, there is no permanent metaphysical self, soul or essence. Realizing this frees us from craving for life and terror of death and all the negative emotions and actions that go with them. Understanding the second of these concepts requires us to look within rather than without for the solution to the problem of individual and social conflict.

what the great Buddhist masters said about laughing? Click Here