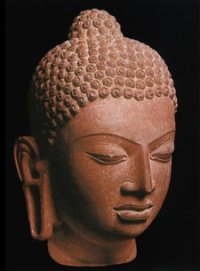 The ear lobe (kaõõapatta) is the soft nodule that hangs below the pinna of the outer ear. On both ancient and modern Buddha statues in all cultures the earlobes are depicted as elongated and usually pierced. Most Buddha statues are meant to be symbols of the enlightened state as much as portraits of the Buddha himself. However, the elongated ear lobes on statues are the survival of a distant memory of what the Buddha actually looked like. In ancient India men and women commonly wore ear plugs. Children's ear lobes were pierced and a small clay cylinder was put in the holes. As the child grew, increasingly large cylinders were put in the lobes until they had stretched enough to accommodate plugs with diameters of up to 6 centimeters. Hundreds of these objects have been found by archaeologists and are displayed in some museums in India. Prince Siddhattha would have worn such ear plugs when he was a lay man and would have taken them off when he renounced the world, leaving his ear lobes elongated. See Physical Appearance.

what happened when the Buddha sneezed while giving a sermon? Click Here