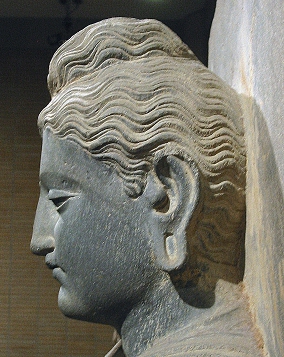 There is enough incidental information in the Tipiñaka to get a good idea about the Buddha's physical appearance. He was about a fathom tall (S.I,62), a fathom (byàma) being the distance between both hands when extended to their full length. We are also told that he was four finger-breadths taller than his half-brother Nanda (Vin.IV,173). When young, before his renunciation, he had long black hair and a beard (M.I,163). Although statues of the Buddha always show him with hair, this is an iconographic convention and is not historically accurate. After his renunciation, like all other monks, he `cut off his hair and beard' (M.I,163). All sources agree that the Buddha was particularly good-looking. The brahmin Soõadaõóa described him as `handsome, of fine appearance, pleasant to see, with a good complexion and a beautiful form and countenance' (D.I,115). These natural good looks were further enhanced by his deep inner calm. Another person, Doõa, described him as `beautiful, inspiring confidence, calm, composed, with the dignity and presence of a perfectly tamed elephant' (A.II,38). Concerning his complexion a particular brahmin said of him: `It is wonderful, truly marvellous how serene is the good Gotama's presence, how clear and radiant is his complexion. Just as golden jujube fruit in the autumn is clear and radiant, so too is the good Gotama's complexion'(A.I,181).

However, like everyone else, the Buddha's appearance declined with age. ânanda described him in old age like this: `The Lord's complexion is no longer pure and bright, his limbs are flabby and wrinkled, his body is stooped, and his faculties have changed' (S.V,216). In the last months of his life the Buddha said of himself: `I am now old, aged, worn out, one who has traversed life's path. Being about eighty, I am approaching the end of my life. Just as an old cart can only be kept going by being patched up, so too my Body can only be kept going by being patched up' (D.II,100). See Ear Lobes.