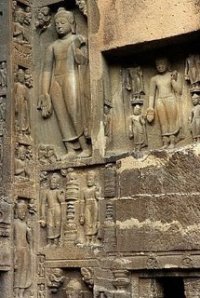 A statue (pañimà) is a figure of a person or animal in metal, stone or some other substance. Buddha statues are not, as is sometimes supposed, idols, but representations of the Buddha meant to act as an object of contemplation or a focus of attention. The first Buddha statues were made in India in about the 2nd century CE, perhaps due to Greek influence. Before that time, the Buddha was represented by a wheel, a Bodhi Tree, a pair of footprints or an empty throne. It is sometimes said that for several centuries it was `forbidden' to make statues of the Buddha, but this is incorrect. Statues of the Buddha were not made simply because iconographic skills had not developed to a high enough level. There is no evidence that Buddhist leaders ever `forbade' the making or use of statues.

Ancient artists did their utmost to make Buddha statues as atheistically pleasing as their skills allowed. The Varàhamihira Saühità, an ancient manual for image makers, says:   `To the image of the Buddha give a fair face and limbs as beautiful as possible, make the lines on the palms of his hands and the soles of his feet like a lotus; and represent his sitting on a lotus. Give him grey hair and represent him with a serene expression, like that of Brahma.'  Statues of the Buddha show him either standing, sitting or lying down. The lying statues, often mistakenly called `the sleeping Buddha' actually depict the Buddha's passing away. The hands of Buddha statues are usually shown in one of several gestures (mudrà), the most common being the gesture of meditation, of fearlessness, of teaching and the earth-touching gesture. On the top of the statue's head is usually a flame; sometimes realistically depicted,  at other times highly stylized, meant to suggest a halo.

Buddhists place flowers, lights and incense before Buddha statues to honour the Buddha's memory and as reminders of fleeting beauty, the light of knowledge and the fragrance of virtue respectively. Although much popular superstition surrounds Buddha statues, particularly in Thailand, no informed Buddhist believes that they are anything more than symbols of the enlightened person in material form. See Idolatry and Joy.