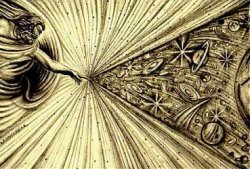 God (issara) is a supernatural being believed by some to have created the universe and who should be feared and worshipped. This being is usually said to be all-loving, all-knowing and all-powerful. The Jewish and Christian god is named Yahweh, that of Sikhism Sat Nàm, and of Zoroastrianism, Ahura Mazdah. Hindus worship many gods but the supreme god for many Hindus is either øiva or Viùõu.

Buddhism denies the existence of a supreme god for three reasons. (1) God's supposed attributes contradict each other. If God is all-loving and all-powerful, Buddhists ask, why is humankind so often afflicted by disease, disaster and depravation? (2) Belief in God is not necessary. Buddhism teaches that morality can be sound, that life can be meaningful and that the origins of the universe can be satisfactorily explained without having to introduce the notion of God. (3) All the evidence used to prove God's existence could easily be interpreted in other ways. For example, miracles could be caused by psychic powers, being saved from an impending danger could be due to coincidence, and rising from the dead might mean that the resurrected person was not really dead in the first place.

However, while there is no room in the Buddhist understanding of reality for a single supreme god, Buddhism does accept the existence of other divine beings which we can call gods (deva). These beings may be more powerful and glorious than humans but they are not necessarily as spiritually developed and thus have no significant role in our spiritual life. Apparently the gods would sometimes appear to and converse with Ugga, one of the Buddha's more advanced lay disciples. While others might have considered such divine visitations a sign of special favour or a great blessing, Ugga said he was completely unimpressed and unmoved by them. Anything of significance the gods could have told him he already knew (A.IV,211). See Agnosticism, Determinism, Heaven, Pseudocyesis and Theism.

Buddhism and the God Idea,Nyanaponika,1981.