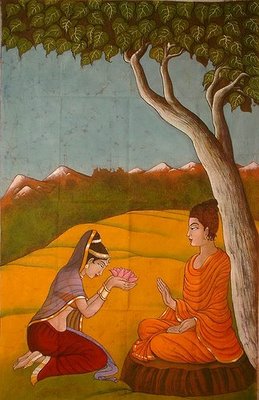 Ambapàlã was a wealthy and accomplished courtesan of Vesàli and widely recognized as one of the great beauties of her time. She was described as `good to look upon, charming, with a flawless complexion and skilled at singing, dancing and lute playing' (Vin.I,268). She also owned a large mango grove on the outskirts of Vesàli where the Buddha and some of his monks occasionally stayed (e.g. A.IV,100; S.V,141; 301). When the Buddha was in Vesàli during his last journey, Ambapàlã donated this grove to him to be used as a monastery (D.II,95-7). Some time after this, probably in her old age, Ambapàlã became a nun and, according to tradition, eventually attained enlightenment.

In the Therãgàthà there is a poem in 19 verses by her in which she poignantly compares her beauty as it once was with how she looked in her old age (Thi.252-70). A thousand years after this, when the Chinese pilgrim Xuanzang was in Vesàli, he noticed that the monastery built in Ambapàlã's grove still functioned and that the woman herself was still remembered. See Hair and Prostitution.

dispite the Buddha’s teaching of kindness to animals that cock fighting is a popular pastime in Burma , Thailand and Laos ? Click Here