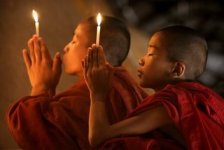 Light (àloka) is electromagnetic radiation at a particular wavelength. In the form of lamps or candles light is one of the three things used in the Buddhist påjà or contemplative ceremony, the others being flowers and incense. In Buddhism, as in most traditions, light is used as a metaphor for or is compared with wisdom or understanding because of its characteristic of being able to make things visible. Ràhula, the Buddha's son, called his father the `Torchbearer of Humanity'(Sn.336). The Buddha sometimes challenged his audience `Will you not seek the Light?'(Dhp.146) and he referred to his enlightened disciples as `Bringers of Light'(It.80). Once he said to his monks: `You should shine forth'(sobhetha), meaning that their behaviour should be an inspiration to others (Vin.I,187).

In a passage of considerable beauty the Acchariyaabhåta Sutta depicts Prince Siddhattha's conception as an event which would bring a light into the world by which  beings would become aware of each other. `When the bodhisattva decended into his mother's womb a great immeasurable light more radiant even than the light of the gods shone forth into the world. And even in the dark gloomy spaces between the worlds where the light of the sun and the moon, powerful and majestic though they be, cannot reach, even there did that light shine. And the beings that inhabit that darkness became aware each other and thought: Indeed there are other beings here' (condensed, M.III,120).

When informed Buddhists light or place lamps before a Buddha statue, they contemplate the majesty and liberating power of wisdom and resolve to make it more a part of their daily lives.

which is the most corrupt Buddhist country, according to Transparency International? Click Here