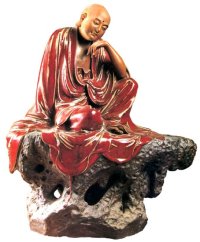 Ràhula was the Buddha's only child (A.I,24). He may have been given this name because he was born during or around the time of a lunar eclipse (ràhu). It was just after his birth that the Buddha finally decided to renounce the world, become a monk and embark on his quest for truth. About seven or perhaps eight years later the Buddha returned to Kapilavatthu, met Ràhula for the first time since leaving, had him ordained as a novice monk by Sàriputta and took him away with him. This caused considerable distress to both the Buddha's former wife Yasodharà and also to his father Suddhodana. The latter commented that loss of or separation from a child or even a grandchild `cuts the skin, to the muscle, to the flesh, to the bone. It cuts even into the marrow' (Vin.I,83). Probably the Buddha felt he would be able to give his son a more spiritually-based education than he would get if he stayed at home. Ràhula grew up to be a well-disciplined monk and eventually became enlightened. He commented: `They call me ßRàhula the luckyû for two reasons, because I am the Buddha's son and because I am at one with the Truth'(Th.295). Other than a few scraps of information, the Tipiñaka gives little information about Ràhula. Three discourses by the Buddha in the Majjhima Nikàya are addressed to his son (M.I,414; 421; III,277).

Great Disciples of the Buddha, Nyanaponika and Hellmuth Hecker, 1997.

that the belief ‘everything is due to past kamma’ is one of the Three Wrong Views in Buddhism?  Click Here