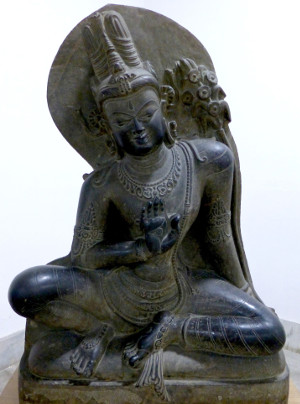 Maitreya, Metteyya in Pàëi, means `The Lovable One' or `The Friendly One' and is the name that the Buddha of the next era will be known by (D.III,76). At present, Maitreya is a bodhisattva abiding somewhere in the world or perhaps in a heaven realm, practising the spiritual qualities that will lead to his enlightenment in the distant future. In most Buddhist iconography Maitreya is depicted as a beautiful young prince with a ståpa in his crown. In late Chinese art he is often depicted as a rotund smiling figure, so as to emphasize his approachability and warm, friendly nature, and is incorrectly dubbed `Laughing Buddha' by Westerners.