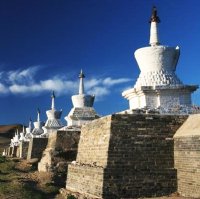 Stupa comes from the Sanskrit word ståp meaning `to heap' and refers to a characteristic Buddhist monument. The Pàëi equivalent is thåpa. After the Buddha's passing and cremation, his ashes were divided into eight parts and each was interned under a large hemispherical earthen mound, as was the custom of the time (D.II,). People would pay their respects to these mounds until eventually they came to be seen as symbols of the Buddha himself. In time the simple earthen mounds evolved into masonry structures, sometimes of great size and beautifully decorated.

Stupas were not unique to Buddhists, Jains and Ajivakas also used them. After Mahàvãra death his   relics were enshrined in a stupa (M.II244) and archaeology in Madhura has unearthed several impressive Jain stupas.

Today ståpas usually contain real or supposed relics of the Buddha or some great saint or articles used by them, and are common objects of devotion in all Buddhist countries. The world's largest such monument is the Jetavana Ståpa built by King Mahàsena towards the end of the 4th century in Anuràdhapura, the ancient capital of Sri Lanka. This huge monument was originally 160 meters high and has a diameter of 109 meters. It has been calculated that the Jetavana Ståpa contains 620 million bricks and weighs 657,000 tons. It sits on a huge paved terrace 173 meters square which could have accommodated up to 30,000 devotees on special occasions. See Doõa.

The Ståpa, Its Religious, Historical and Architectural Significance, ed. by A. L. Dallapiccols,1980.