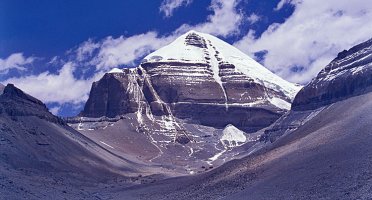 Mount Meru, also called Mahàmeru, Sineru, Neru and Kelàsa, is a mountain often mentioned in the Tipiñaka and now identified with the 6638 meters high Mt. Kailash in the western Himalayas (A.I,227; Ja.I,321; III,210). In ancient Indian geography, Mt. Meru was believed to be the point at which the four continents met, the highest mountain on earth and, according to later cosmology, the abode of the gods.

It is sometimes said that Mt. Meru is `sacred' to Buddhists, Hindus and Jains but this statement needs to be qualified as far as early Buddhism is concerned. While the early Buddhists glorified Mt. Meru for its size, majesty and beauty, they did not believe that it had any spiritual powers as such. According to the Buddha, going to `sacred' mountains, trees or shrines cannot impart any genuine spiritual benefit (Dhp.188-92). However, in the Tipiñaka, Mt.Meru's perceived characteristics are sometimes equated with the highest spiritual values. To have attained enlightenment was metaphorically described as having `touched great Neru's peak'(M.I,338). The mountain's immovability and equanimity were also seen as traits worthy of emulation. However, other characteristics of the mountain were considered less admirable. Legend said that it gave off a golden light which made all the animals that lived on it, noble and ignoble, appear to be the same. In other words, it lacked discrimination (avisesakara) and the ability to distinguish (navibhajati) between skilful and unskilful, good and bad, foolishness and wisdom (Ja,III,247; V,425).

In contemporary Western society there is considerable reluctance to express disapproval of any belief no matter how unrealistic or any behaviour no matter how immoral. When opinions about such things are made hastily or with bias, when they become a means of avoiding looking at oneself, or when they lead to self-righteousness and smugness, such reluctance is more than justified. But having philosophical ideals and ethical values and then living by them, requires discrimination, making informed judgments and choosing  one idea or course of action and rejecting others. This is how wisdom is developed.

what the Buddha meant when he advised developing ‘a mother mind’? Click Here