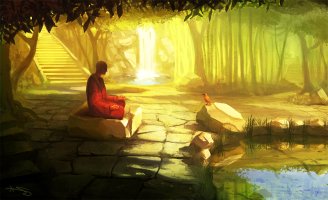 Mindfulness of breathing (ànàpànasati) is the most basic and also the most popular form of Buddhist meditation. The Buddha said: `When mindfulness of breathing is developed and cultivated, it is of great fruit and benefit'(M.III,82). Those doing this meditation will sit in a comfortable posture, usually cross-legged and with a straight back, and try to gently focus their attention on the in-and-out movement of the breath. As they gradually proceed, they will more quickly notice when their attention strays and be able to return it to the breath. Thus they will develop enhanced concentration, mental discipline and physical and psychological relaxation. As the practice matures, concentration should be allowed to give way to mindfulness, i.e. rather than trying to control the attention, one simply becomes aware of what is happening from moment to moment. This physical comfort and mental alertness is the first step in controlling the mind so that it can be understood and eventually freed.

The Buddha said: `Just as in the last month of the hot season when dust and grit blow about and an unexpected shower of rain immediately settles it, so too, mindfulness of breathing, when developed and cultivated, is peaceful and sublime, a pleasant way of living and it dispels and settles evil unskilful thoughts immediately'(S.V,321). The famous psychologist William James made a similar point only in modern language: `The faculty of voluntarily bringing back a wandering attention over and over again is the very root of judgment, character and will. No one is compos sui (master of himself) if he has it not. An education which would improve this facility would be the education par excellence.' See Lotus Posture.

that the Bhagavad  Gita teaches that a soldier who dies in battle will go to heaven and that  the Buddha disputed this claim? Click Here