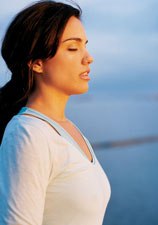 The breath (àpàna) is the air that moves in and out of the body with the rise and fall of the diaphragm. Like most people, the ancient Indians associated life with respiration and in fact one of the Pàëi words for animal life is pàõa, literally `breathing things'. An exact literal translation of the first Precept would be: `I take the precept not to harm breathing things' (pàõàti pàtà). Thus technically, killing living but non-breathing things such as bacteria, sponges, plants, etc. would not be breaking the Precept.

Because of the connection between life and respiration, the Indians saw the breath as having a mystical significance. Ascetics also noticed that holding the breath, or breathing rapidly for extended periods, would cause changes in consciousness which were interpreted as exalted states. Consequently, many of the types of meditation popular during the Buddha's time focused on the breath. Before his enlightenment, one of the practices the Buddha experimented with was `breath retention meditation' (appàõakaü jhànaü), which he finally gave up as making his body overwrought and agitated and causing him pain (M.I,243-4).

Although the Buddha taught a meditation based on the movement of the breath (ànàpànasati), he did not do so because he believed it has any mystical power or significance. So why the breath? There were probably three reasons for this. The first is purely practical. (1) The breath is a convenient object to focus attention on and it is available to everyone. (2) The breath's gentle in-and-out rhythm has a natural ability to calm the mind. (3) Focusing on the breath can be the first step in drawing attention away from external distractions to the mind. Many mental states cause a change in the breathing. When we are calm our breath is long, slow and gentle, and when we are excited it becomes short and rapid. We hold our breath in expectation, huff with annoyance, sigh with sadness or regret, get exasperated, and breathe free with relief. Watching the movement of our breath naturally leads to becoming aware of the movement of our mind. See Mindfulness of Breathing.