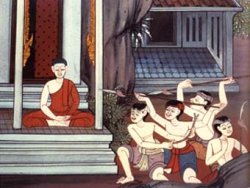 Moggallàna was one of the Buddha's two chief disciples. He and his childhood friend Sàriputta both became monks together under the teacher Sa¤jaya, but eventually became disillusioned with him and his philosophy and then split up and went their separate ways looking for a better teacher. One day Sàriputta heard about the Buddha's Dhamma, converted and straight away went in search of his friend to tell him of the wonderful teaching he had discovered. When they met and Moggallàna heard the Dhamma, he too converted and then the two young men went to find the Buddha so they could be ordained as monks by him. In time the Buddha came to look upon Moggallàna and Sàriputta as his chief disciples and heirs. Moggallàna had a natural ability for psychic powers and through meditation developed them to a very high degree, although he never became proud of or was seduced by them. Tradition also says he had a dark complexion. The Tipiñaka records several dozen discourses delivered by Moggallàna. Moggallàna died before the Buddha, murdered by fanatical rivals of the Buddha's teachings. In Sri Lankan and Thai temples, the main statue of the Buddha is often flanked by two smaller statues, one being of Moggallàna and the other of Sàriputta.

Great Disciples of the Buddha, Nyanaponika, 1997.