BLIND MEN AND THE ELEPHANT, THE PARABLE OF THE 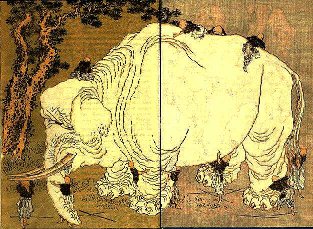 The parable of the blind men and the elephant is probably the most widely known and the most loved of all the world's parables. By far the earliest version of this parable is to be found in the Udàna, and is attributed to the Buddha (Ud.67-9). The parable's appeal is due to how well it makes its point, its striking juxtaposing of man and beast and its gentle humor. The background to the Buddha telling this parable is thus. Some monks in Sàvatthi noticed a group of non-Buddhist monks quarrelling with each other about some philosophical or theological issue. Later, they mentioned what they had seen to the Buddha and he said, `Wanderers of other sects are blind and unseeing. They don't know the good and the bad and they don't know the true and the false. Consequently they are always quarrelling, arguing and fighting, wounding each other with the weapon of the tongue.' Then the Buddha related his famous parable.

The key to understanding the meaning of the parable is in the last line of this verse; seeing only one side of a thing (ekaüga dassino). This is but one example of where the Buddha gives advice about how to form a more complete, a more accurate view of reality. Here he is suggesting one important point Ý that we should not mistake the part for the whole. In other places he advises keeping personal biases out of the way when assessing views, taking time to form opinions and even when having done so, keeping an open mind so as to be able to consider other points of view.

After the Udàna, the earliest mention of the parable of the blind men and the elephant is to be found in the Syadvadamanjari, a Jain work where it is used to illustrate the Jain doctrine of relativity of truth (anekantavàda), the idea that `every view is true from some standpoint (naya) or other and in general no view can be categorically false.' After this the parable spread throughout India and beyond. It appears in Brahmanical and Hindu works, in some Persian collections of stories and even in one of the works of the Turkish Sufi mystic Rumi. Today there are numerous children's books about it or which include it.

what the ancient Indians called cigarettes and how they made them? Click Here