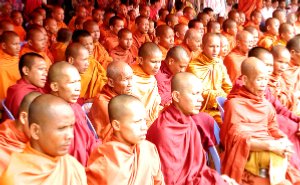 A monk (bhikkhu) is a male who has renounced ordinary society to live a celibate, monastic life. The Buddha founded an order of monks and nuns called the Saïgha, to provide the optimal environment to practise the Dhamma and also to have a body of specialists who could transmit that Dhamma. Monks are expected to have eight simple requisites and to live by the 227 rules of the Vinaya. Someone can become a novice (sàmaõera) while still a boy, but must be 20 years old or over to be a fully ordained monk (upasampadà). If a monk loses interest in the monastic life, he can leave at any time by disrobing in the presence of another monk. The most characteristic features of Buddhist monks are their yellow robes, their shaven heads and their calm, smiling demeanour.

At the time of the Buddha monks addressed each other as`your reverence' (àvuso),`sir' (bhante) or `good sir' (bho). In Sri Lanka still, and increasingly in the West too, monks are addressed as bhante. Someone who has been a fully ordained monk for at least ten years or who, although junior, is accomplished in learning or spiritual practice, can be addressed as `venerable' or `elder'(thera, A.II,22). A monk of 20 years standing is addressed as `great elder' (mahàthera). See Ordination.