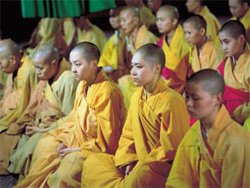 A nun (bhikkhuõã) is a woman who has renounced ordinary society to live a celibate monastic life. The contemporary terms `female monk' or `female priest' are misnomers. Nuns are the second of the four members of the Buddhist community (parisà), the others being monks, lay men and lay women. To be properly ordained, a woman must be ordained first by a quorum of nuns and then a second time by a quorum of monks. Some nuns in the scriptures are described as being learned (bahussuta), eloquent (bhàõika), confident (visàrada) and outstanding at teaching the Dhamma (paññha dhammaü kattaü katuü, Vin.IV,290). The Therãgàthà, one of the books in the Buddhist scriptures, contains poems composed by 73 individual nuns, and the Bhikkhunã Saüyutta of the Saüyutta Nikàya contains 10 suttas by or about nuns (S.I,128-135).

At the time of the Buddha nuns were usually addressed both by other nuns and by lay people as `noble lady' (ayye). Monks would usually address them as `sister' (bhaginã). In Theravàda lands, the nun's lineage died out around 1000 CE and traditionalists do not believe that it can or should be revived because there are no nuns to ordain new nuns. However, the nuns' lineage continues in most Mahàyàna countries, and in places like Taiwan, nuns are a dynamic and respected presence within the Buddhist community. See Household Life, Mahà Pajàpatã Gotamã and Saïghamitta