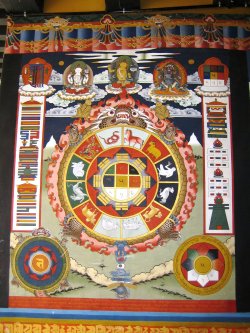 Astrology (jotisattha or nakkhattavijjà) is the belief that the position of the planets and the stars in relation to each other has a significant influence on human character and destiny. This belief contradicts the most basic Buddhist doctrine that our character and destiny are the result of the sum total of our intentional thoughts, speech and actions, i.e. our kamma. The Buddha said monks and nuns must not practise astrology or any other form of fortune-telling, all of which he called `base arts' (tiracchànavijjà, D.I,8). In the Jàtaka he tells a story which highlights the foolishness of relying on astrological predictions and then adds this verse: `While waiting for a lucky star, the foolish will miss an opportunity. It is goodness that is ßluckyû. What can mere stars do?' (Ja.I,258). Ironically, many people in Buddhist countries believe in astrology and monks commonly do astrological predictions.