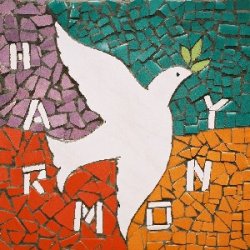 Harmony (avirodha or sahita) is the smooth, pleasant and non-contentious functioning together of two or more things. The Buddha often spoke of the need and also the desirability of harmony within and between groups of people. Some of the things contributing to what he called `the progress of a society' (aparihàniyà dhamma) are the ability `to meet together in harmony, adjourn in harmony and conduct business in harmony'(D.I,74). The former murderer Aïgulimàla was echoing the Buddha's sentiments when he said: `Let my enemies hear from time to time the Dhamma of those who speak of patience and in praise of harmony, and let them live in accordance with it' (M.II,105).

However, this is easier said than done. Humans are notorious for not being able to get along with each other, and in this respect religious groups are often little better than others. Why is it, someone once asked the Buddha, `that wanting to live in peace and without hate, violence, hostility, ill-will and malignancy, humankind is constantly in conflict and plagued by hate, violence, hostility, ill-will and malignancy and lacking in love?' (D.II,276). The root cause of most disharmony is clinging and craving; clinging to one's own ideas, to one's belongings or to one's position; craving for pleasure, for power or for recognition. And at the deepest level, craving is spawned by the notion of self or ego. Complete harmony and lasting peace will only be possible when one has attained enlightenment. But in the meantime, there is much we can do as individuals to make our relationships more harmonious.

The Buddha once asked several of his monk disciples how they were able to live together `in harmony, mutual appreciation and agreeability, like milk and water mixed, regarding each other with the eyes of love' (M.III,156). One of them, Anuruddha, replied, `I always consider what a blessing it is, what a real blessing, that I am living with such companions in the spiritual life. I think, speak and act with love towards them, both in public and in private. I always consider that I should put aside my own wishes and acquiesce to what they want and then I do that. Thus we are many in body but one in mind'(M.III,156).

Several things are mentioned here by the Buddha and Anuruddha Ý love, generosity, having common values, appreciation of others, being sensitive to their needs and not always demanding one's own way. Other qualities that nourish harmony are forgiveness, kindness, respect, sympathy and tolerance.

that the Buddha was the first person in history to condemn slavery? Click Here