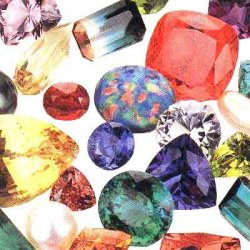 Gems (maõi or ratana) are unusually bright, colourful or transparent minerals found in the Earth. In the West, some organic substances like ivory, amber, jet and shell, are also considered to be gems, and the same was true in ancient India. The Buddha listed the ten most common and sought-after gems as pearl (muttà), crystal (maõi), beryl (veëuriya), conch shell (saïkha), quartz (silà), red coral (pavàla), silver (rajàta), gold (jàtaråpa), ruby (lohitaïka) and emerald (masàragalla, Ud.54). Although India was the world's only source of diamonds (vajira) until the 17th century, it is strange that the Buddha did not include them in this list, although he did mention diamond elsewhere (Dhp.161).

The ancient Indians valued crystal because they believed it could purify dirty water (Mil.35). Veëuriya is often translated as lapis lazuli but this is incorrect. The Buddha described this gem as being eight-sided, transparent and the colour of a peacock's neck (D.I,76; Ja.I,207), qualities that lapis lazuli does not have. Beryl, however, is a hexagonal crystal which together with the two ends gives it eight sides, it is transparent and it ranges in colour from green to a deep blue-green. Conch shells were valued because they can be polished to a pure, glossy white. The Buddha said that the virtuous, disciplined monk lives a life that is `perfectly clean, perfectly pure and polished like a conch shell' (Vin.D.I,63). The rare conch that spiraled to the right was considered particularly auspicious and would fetch a high price (Ja.IV,350).

In the West we usually think of gold (hema, kanaka or suvaõõa) as being a precious metal rather than a gem. This metal has always been desired because of its beauty, malleability and workability, qualities it shares with the liberated mind. The Buddha mentioned different types of gold (hàñaka, jambonada, ka¤cana and siïgã, A.I,181: IV,255) and on several occasions compared the process of refining precious metals to purifying the mind through meditation (A.I,257-8; III,16; Dhp.239; S.V,92).

In the longest and most detailed of these comparisons he said: `There are gross impurities of gold such as stone and sand, gravel and dirt. The dirt-washer or his assistant puts the ore in a pan and washes it back and forward until the dirt runs out. This being done there remain smaller impurities such as grit and sand and so the dirt-washer repeats the process. This being done there still remain minute impurities like fine grit and silt so the dirt-washer repeats the process one more time until only gold dust remains. Then the goldsmith or his assistant puts the gold dust into the crucible and smelts it so that it becomes molten. But he does not take it out because the dross has not yet come to the top and the gold is not yet malleable, workable, gleaming or ready for being fashioned. But after more smelting the dross is removed and the gold becomes malleable, workable, gleaming and ready for being fashioned. Whatever jewelry the goldsmith wishes to make, be it a diadem, earrings, a necklace or a chain, he can do so with that gold. In the same way, for a monk intent on developing higher mind there are gross impurities of action, word and thought. Such faults the thoughtful, capable monk gets rid of. When this is done there remain smaller impurities such as thoughts of sensuality, resentment or cruelty and he gets rid of these. Then there are still subtle impurities such as thoughts about his relatives, his country or his reputation and he gets rid of these. Then there might still be anxiety about higher attainments and so his concentration is not completely peaceful or lofty, tranquil or unified, and it is maintained by conscious effort. But in time his mind does become peaceful and lofty, tranquil and unified and conscious effort is no longer necessary to maintain it. Then whatever state of mind is attainable by direct knowledge he can realize it, given the right conditions'(A.I,253-5).

In the later Buddhist tradition the three Refuges, i.e. the Buddha, the Dhamma and the Saïgha, were and still are also known as the Three Gems (Tiratana), because like gems they are beautiful, sought-after and of great value (Sn.224-35).

what the great Buddhist masters said about laughing? Click Here