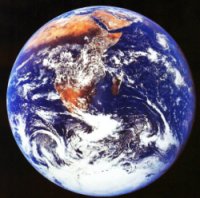 The Earth (Pañhavã) is a planet that spins on its axis, moves around the sun and supports life on its outer surface. The Buddha described the Earth as having great depth,   being of immense size, and as spherical or disk-shaped (maõóala, D.I,134). Pre-Buddhist religion in India personified the Earth as the goddess Pañhavã, equivalent to the Greek Gaia or the Roman Terra.

According to legend, after his enlightenment the Buddha touched the earth and called upon Pañhavã to witness his great victory over the darkness of ignorance. Many statues of the Buddha depict this scene by showing him with his left hand nestled in his lap and his right hand on his knee, the finger tips touching the ground. Although the Buddha never mentioned Pañhavã,   he did see the Earth as having certain qualities which made it worthy of our respect. According to him, the plants which sustain all life grow because they draw a nourishing `essence' (pañhavãojà or pañhavãrasa) from the earth (A.V,213; S.I,134).

But for the Buddha, the Earth was not just life-sustaining, it even had certain spiritual qualities worthy of our emulation. He asked us to be `clear like a pool without mud', `unshakable like a pillar set in the ground' and `free from hostility like the great Earth' (pañhavà samo novirujjati, Dhp.95). It was this, the Earth's seemingly patient endurance, that the Buddha admired most. On another occasion he said to his son Ràhula: `Just as people throw clean or dirty things on  the Earth and yet it never gets annoyed, humiliated or disgusted, in the same way, develop meditation like the Earth, and then pleasant and unpleasant impressions will not enter your mind and remain there' (M.I,423). See World.

that the Buddha sometimes used the words ‘heart’ and ‘mind’ interchangeably? Click Here