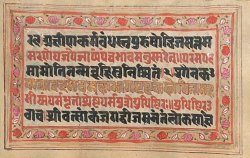 Sanskrit means `polished' or `refined' and is the name of the classical language of India. The sacred scriptures of Hinduism and also of Mahàyàna and Vajrayàna Buddhism were composed in Sanskrit, while the Tipiñaka of Theravàda Buddhism was composed in Pàëi. The two languages have much in common, but Sanskrit has a more complex grammar and a larger vocabulary than Pàëi. Further, Sanskrit evolved its own script, called Devanàgarã, while Pàëi has no specific script. Even at the time of the Buddha, Sanskrit was spoken only in the royal court and by priests and intellectuals, and for this reason the Buddha refused to have his sermons rendered into Sanskrit verse (Vin.II,139). He wanted his teachings to be accessible to all, not just to a small elite.

which is the most corrupt Buddhist country, according to Transparency International? Click Here