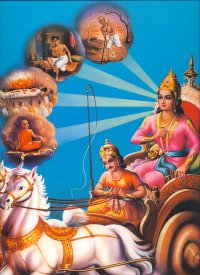 The four sights (catu nimitta) are the four things legend says Prince Siddhattha saw which finally made him decide to renounce the world and search for the Truth. Supposedly, as he drove through the streets of Kapilavatthu he encountered an old person, a sick person, a corpse being taken for cremation and a wandering ascetic.  This legend is not found in the Tipiñaka. It can however, be seen as a metaphor for the Buddhist understanding of the human predicament (old age, sickness and death) and the proper response to it (searching for the way out of the predictament). The legend of the four sights has long been a popular theme in Buddhist art.

Speaking of his decision to renounce the world the Buddha said: `Before my enlightenment, while I was still an unenlightened bodhisattva, I too, being subject to birth, ageing, sickness, death, sorrow and defilement, sought after that which likewise is subject to such things. Then I thought, ßWhy should I do this? Being myself subject to birth, ageing, sickness, death, sorrow and defilement and seeing the danger in that, I should seek after the unaging, unailing, non-dying, sorrowless and undefiled supreme security from bondage, nirvana.û Then later, while still young, with black hair, endowered with the blessings of youth, in the prime of life and despite the weeping and wailing of my parents, I shaved off my hair and beard, put on the yellow robe and went forth from the home life into homelessness'(condensed, M.I,163).