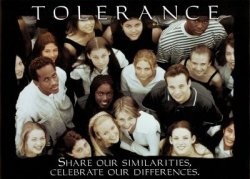 Religious tolerance is an attitude of acceptance and good-will towards faiths other than one's own. Buddhism has generally been a tolerant religion and this tolerance is a natural outcome of several Buddhist doctrines. (1) Buddhism is free from the concept of a god who demands total and undivided loyalty. (2) It has never associated disbelief in the Dhamma with evil, and (3) it recognizes that those of other faiths are as capable of kindness and virtue as Buddhists are. Buddhism has always taught that it is deeds rather than religious affiliation that conditions one's destiny after death. A virtuous Hindu, Christian or Sikh will have a good rebirth while an immoral, hypocritical Buddhist will have a negative one. (4) The concept of rebirth means that Buddhists can accept that while some may not understand the Dhamma in this life, they may have the opportunity to do so in the next life or the one after that. Thus the imperative to convert others in order to save them from hell is absent in Buddhism, as is anger towards those who fail to convert. Buddhism emphasises that negative mental states are unacceptable no matter what, and thus to be angry or intolerance towards those of other faiths is still just anger and intolerance.

In 256 BCE King Asoka was expressing a genuinely Buddhist sentiment when he wrote: `I desire that there be growth in the essentials of all religions. This can be done in several ways, but all of them have their root in restrained speech; in not praising one's own religion and condemning the religion of others, without good cause. And even if criticism is justified it should be done in a mild way. Whoever praises his own religion due to excessive devotion and condemns other religions only harms his own religion. Therefore, contact between religions is good. One should listen to and respect the doctrines professed by others. I desire that all should be well-learned in the good doctrines of other religions.' Like many ancient Buddhist sayings this one has a remarkably modern ring to it.

Writing in 911 the Arab geographer Abu Zeid al Hasan said of Sri Lanka: `In the Island there are a multitude of Jews as well as many other sects, the king permitting the practice of every religion.' The Catholic monk John de Marignolli visited Sri Lanka in about 1349 and found that `the monks made me welcome as if I were one of their own'. When the first American Protestant missionaries arrived in Thailand in the 1840s King Mongkut built them a church and asked them to teach him Latin so he could read the Bible and become familiar with their religion. See Blasphemy and Conversion.