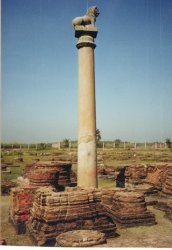 Vesàli was the capital of the republic of Vajji and the scene of many important events in the Buddha's life. The Buddha had a special affection for the city and when, during his final journey he left it for the last time, he turned around to have a last lingering look at it (D.II,1220) The second Buddhist council was held  in Vesàli  about a hundred years after the Buddha's passing. Today, the ruins of Vesàli are spread over a wide area and the most important of these are a huge stone pillar with a lion capital, a large ståpa next to it and another ståpa nearby thought by archaeologists to be the very one erected over the Vajjian's one-eighth share of the Buddha's ashes. Vesàli is 40 kilometres north of Patna, the capital of the modern Indian state of Bihar.