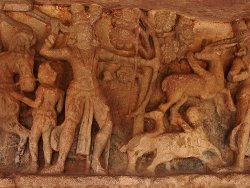 Hunting (migavà) is the stalking, chasing and killing of wild animals. In prehistoric times and even today amongst some primitive tribes, people have hunted to provide themselves with food or to supplement their diets. In later periods hunting was sometimes seen as a way to train for war. Today nearly all hunting is done for sport, entertainment or as proof of courage. Buddhism has always disapproved of hunting because it involves cruelty and killing and is in most cases unnecessary. The Mahàvastu pointed out that even the animals that were not killed during hunts can be wounded and  `escape into the bushes and thickets of the forest, into clumps of grass, reeds and brambles, die and  be eaten by ravens and vultures.'

The Buddha said that fowlers, deer stalkers and fishermen might all have an unfavorable rebirth (A.II,207; S.II,256). The early Buddhists also criticized using animals, e.g. dogs, hawks, cheetahs, etc. to hunt other animals (Ja.V,270), and using one animal as a decoy to catch another (Ja.V,375). Buddhist kings rarely indulged in hunting and few palaces or royal residences in Buddhist countries are decorated with hunting scenes, as are those in many other cultures. Several Jàtaka stories criticize hunting for sport and try to evoke sympathy for the victimized animals (Ja.I,145-54). The Buddhist attitude to hunting is well summed up by Sarabha's exhortation to the king in the Jàtakmàlà: `If you wish to be dear to me, then give up hunting. Because animals are dull by nature we should have sympathy for them. When it comes to being happy and avoiding suffering, all beings are the same. Therefore, if you find something unpleasant you should not inflict it on others.' See Blood Sports.

what the Buddha meant when he said he did not have ‘a closed fist’? Click Here